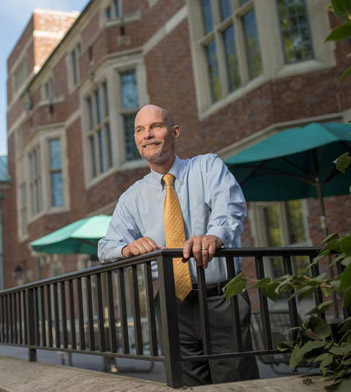 Mark Wallace has been the dean of the Graduate School since January 2016.  As dean, he has developed the Office of Postdoctoral Affairs, created new roles, like the Graduate Life Coach, to support graduate students and postdocs, and established the Russell G. Hamilton Leadership Institute to provide students with the tools to thrive in leadership roles within and beyond the academy.

Wallace joined Vanderbilt in 2006 in the departments of Hearing and Speech Sciences and Psychology, and currently has additional appointments in Pharmacology and Psychiatry and Behavioral Sciences.  A neuroscientist by training, Wallace became director of the Vanderbilt Brain Institute and the Neuroscience Graduate Program in 2008 and served in these roles for eight years until becoming the dean of the Graduate School.  While in the VBI, he also served as the associate director of the Silvio O. Conte Center for Neuroscience Research, spearheading educational outreach activities in the Nashville community.

Prior to Vanderbilt, Wallace received his BA, MA, and PhD degrees at Temple University, was an assistant professor at the Medical College of Virginia/Virginia Commonwealth University, and an associate professor at Wake Forest University School of Medicine.

Among the many awards received throughout his career, Wallace was named the 2015 Frijda Chair at the University of Amsterdam, selected as an American Association for the Advancement of Science Faculty Fellow in 2017, and awarded Fellow status to the Association for Psychological Science in 2018.

His research takes a multidisciplinary approach to examining multisensory processing, and focuses on the neural architecture of multisensory integration, its development, its role in guiding human perception and performance, and changes in sensory and multisensory function in the context of aging, autism, dyslexia and schizophrenia.

Across his career, Wallace has mentored over 45 graduate students, authored more than 400 research presentations and publications, serves on multiple journal editorial boards, is an officer in three scientific societies, and has an established record of research funding from the National Institutes of Health, the National Science Foundation, and a number of private foundations.